Though its been a while now
I can still feel so much pain
Like a knife that cuts you the wound heals
But the scar, that scar remains 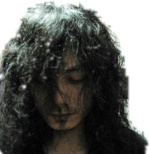